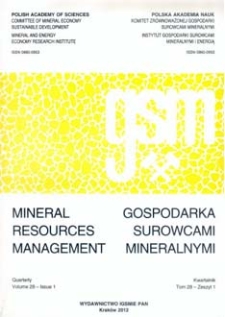 Gospodarka Surowcami Mineralnymi – Mineral Resources Management is a journal of the MEERI PAS and the Committee for Sustainable Mineral Resources Management of the Polish Academy of Sciences. The journal has been published continuously since 1985. It is one of the leading journals in the Polish market, publishing original scientific papers by Polish and foreign authors in the field broadly understood as the management of mineral resources. Articles are published in English. All articles are reviewed by at least two independent reviewers (the Editorial Board selects articles according to the “double-blind review” principle).

The results of investigations in the field of CO2 storage in water-bearing horizons in the area of the Upper Silesian Coal Basin were presented. It has been stated that the CO2 injection process will appear in the area of the storage site and beyond its boundaries. The determination of protective zones for underground CO2 storage and other structural elements, e.g. big tectonic zones, was proposed. These zones will constitute a safety buffer between the underground storage site and utilitarian undertakings conducted in its neighbourhood. In the work the proposal of CO2 injection intensification through controlled fracturing of formations of the future storage site was presented. This action should increase the CO2 injection effectiveness, especially in rock series characterised by average values of reservoir parameters.

The paper presents the location, geological structure and characteristics of the Wyszogród and Dzierżanowo anticlines in terms of potential underground storage of carbon dioxide. The Dzierżanowo and Wyszogród anticlines are two of the nine pre-selected structures for underground storage of carbon dioxide in Mesozoic deposits of the Płock Trough. They were detected by seismic profiles and deep boreholes. The Dzierżanowo Anticline is explored in more detail (five boreholes) than the Wyszogród Anticline (one borehole). Lower Cretaceous and Lower Jurassic aquifers have been proposed for CO2 storage in these areas. They have similar parameters: average thickness (144 mand 161 m; 140 mand 112 m, respectively), depth to the aquifer (200-300 m, lower for the Dzierżanowo Anticline), high porosity and permeability of reservoir rocks (several hundred mD and more), high capacity storage of CO2 (much higher for the Wyszogród Anticline) and large thickness of the overburden seal. In both cases, the sealing series require further, detailed investigation of their sealing properties. No faults are observed within the reservoir rocks and overburden seal in the Wyszogród Anticline. They occur in the deeper parts of the Zechstein-Mesozoic succession up to the Lower Cretaceous in the Dzierżanowo Anticline. Due to its degree of exploration and the depth to the aquifer, and similar properties of the reservoir rocks and the sealing caprock, the Dzierżanowo structure seems more favourable for the underground storage of carbon dioxide. The Wyszogród and Dzierżanowo structures may be of interest to several large CO2 emitters in the region: Vettenfall Heat Poland SA - (Siekierki and Żerań, Warsaw) and the Dalkia Łódź ZEC SA, located at a distance of up to 100 kilometres.

The subject matter of the articles published in Mineral Resources Management covers issues related to minerals and raw materials, as well as mineral deposits, with particular emphasis on: