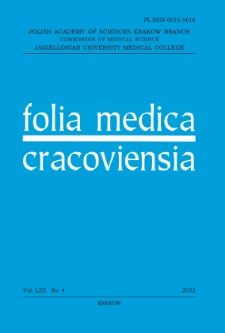 Both sarcoidosis and primary Sjögren syndrome (pSS) are multisystem disorders of unknown etiology, which share certain clinical features, making the diff erential diagnosis a real challenge in clinical practice. Several published case reports and case series have posed the question as to whether there is a real association — mimicry between the two diseases or it is just coincidence. We attempt, aft er systematic and comprehensive research of the relevant published literature, to present all those data, clinical or paraclinical, which could be useful in the diagnostic approach and the distinguishment of the two diseases. It is certain that, besides the classic diagnostic methods, emerging is the role of immunology and genetics on this direction, although not established yet.
Go to article

Objective: The goal of this contribution is to present and familiarize the medical community with the method for the assessment of trace and essentials elements in prostate tissue sections. Materials and methods: X-ray fl uorescence based technique (namely Synchrotron Induced X-ray Emission (SRIXE)) is described in terms of methodology, sample preparation and the evaluation of the recorded results (spectral data sets). Materials for the samples were collected from the patients underwent radical prostatectomy due to Adenocarcinoma prostatae. Specimens were freeze-dried, cut by microtome (to the thickness of 15 μm), one slice was placed on Mylar foil (for SRIXE measurements) and adjacent one on microscopic glass (for histopathological assessment). Results: Results presented here show the usability of SRIXE method for the evaluation of concentration of trace and essential elements in prostate tissue sections with the spatial resolution better than 15 microns. Discussion: Histopathological analysis of samples, which is only focused on morphological features, is unable to reveal information about changes in biochemical signature of tissues aff ected by the illness. SRIXE is a powerful and promising technique to analyse even very low concentrations of selected elements at the cellular level without any labelling or separating procedures. Obtained results may be correlated with classic histopathological assessment allowing for drawing conclusions on the changes in certain elements concentrations with the progression of disease. Moreover, mentioned in this work analysis, can be performed for any type of biological tissues.
Go to article

Background: Unhealthy diet and cooking method used may infl uence the risk of breast cancer (BC), but there is only limited evidence with regard to benign breast disease (BBD). The aim of this study was to assess a relationship between cooking technique, especially fried to boiled meals ratio in the diet, and the risk of BC and BBD in a group of Polish women. Material and methods: A case-control study involving 34 BC cases, 81 BBD cases and 122 healthy controls was conducted between July 2007 and November 2011. All the women were asked about their nutritional habits, especially the way of preparing meat and fi sh dishes. Th en the ratio of fried to boiled meals was calculated. Results: High fried to boiled ratio was associated with increasing risk of BBD, but not BC. Women consuming fried dishes more oft en than boiled dishes had elevated risk of BBD: OR = 3.04 and OR = 3.65 for the second and the third tertile, respectively. Adjustment for the other confounders only slightly altered this relationship. Conclusion: Women who preferred frying as a cooking technique had increased risk of benign breast disease, but not breast cancer. Th ere is a need of more precise investigation to confi rm this association.
Go to article

Developing the empathic attitude is one of the tasks of medical education as it aff ects the quality of therapeutic contact in the relationship between the doctor and the patient, conditioning the treatment process. According to Davis’s concept, empathy is defi ned as an aff ective-cognitive reaction in the context of the other person’s experience. Aim: Analysis of profi les of empathic sensitivity in students of medicine. Group: Male and female students of the fi ft h year of medicine who agreed to participate in an anonymous study (n = 153; M = 57, F = 96; mean age: 23 years). Tools: Th e Empathetic Sensitivity Scale (EES), which is the Polish tool for Davis’s Interpersonal Reactivity Index (IRI) was used. Th e ESS includes three sub-scales: Empathic Care (EC), Personal Distress (PD) and Adopting Perspective (AP). Results: The raw results were converted into sten scores and for sten scores for all three dimensions of empathetic sensitivity no diff erences were found between male and female students. Th ree clusters (1: n = 33%, 2: n = 39%, 3: n = 28%), which diff er in terms of each distinguished indicator, were identifi ed. Conclusions: Th e first cluster characterizes empathetic people, both in the aff ective and cognitive spheres, and those dealing well with unpleasant emotions in situations diffi cult to others. Th e second cluster characterizes participants with the ability to recognize the needs of others and to take into account their perspectives; the third cluster includes participants with a tendency to focus on their own experiences emerging in response to other people’s suff ering but with the ability to understand a situation and show empathic concern for the other person. The most favourable profi le — for a future doctor as well as for his patients — is the fi rst cluster because the doctor, with his empathic sensitivity directed towards the other man, can deal with his own unpleasant emotions.
Go to article

Background: Air pollution is a severe problem in Poland, with Kraków area being among the regions with the worse air quality. Viral croup or pseudocroup is a common childhood disease that may manifest with severe upper respiratory tract obstruction. Our aim was to evaluate the associations between incidence and severity of viral croup symptoms among children living in Kraków area, Poland, and air pollution. Methods: Th e retrospective cross-sectional study included Kraków area residents <18 years of age admitted to the Emergency Department of St. Louis Children Hospital in Kraków, Poland over 2-year period. Daily mean concentrations of air pollutants: particulate matter (PM10 and PM2.5), nitric oxides (NOx), carbon oxide (CO), sulfur dioxide, ozone, and benzene were retrieved from public database of measurements performed at three local stations. Numbers of cases of viral croup per week were correlated with weekly mean concentrations of air pollutants. Mean air temperature was treated as a cofactor. Results: During the studied period, mean concentrations of PM10, PM2.5, and NOx exceeded the allowable levels (yearly means) specifi ed by Polish law regulations. Signifi cant positive correlations of moderate strength were observed between weekly mean concentrations of most air pollutants, especially PM10, PM2.5, CO and benzene, and numbers of cases of viral croup recorded per week, confi rmed in the analysis restricted to non-holiday period and to winter months only. Th e correlations between NOx, CO, benzene and croup prevalence were independent of temperature in non-holiday period. Conclusions: Our results support adverse impact of air pollution on children’s respiratory health.
Go to article

Introduction: Interventional cardiology (IC) is a rapidly expanding fi eld of medicine. Medical studies should provide students the necessary level of knowledge about new techniques in IC. The aim of the study was to assess the medical students’ knowledge about various new areas of IC. Material and methods: Self-designed questionnaire was used to assess student’s knowledge. It contained 31 questions. Th e initial 3 questions concerned general information, the remaining ones were related to diff erent IC techniques: Transcatheter Aortic Valve Implantation (TAVI), Bioresorbable Vascular Scaff old (BVS), percutaneous mitral regurgitation repair methods, Left Atrial Appendage Occlusion (LAAO), Renal DeNervation (RDN), Balloon Aortic Valvuloplasty (BAV) and Atrial Septal Defect/Persistent Foramen Ovale (ASD/PFO). One point for each correct answer was awarded. Results: In our study participated 104 students. Mean score was 15.9 ± 5.8 points. 24% of participants were 3rd year students, 38% — 4th, 20% — 5th and 18% — 6th. Th ere was no diff erences in level of knowledge between students of diff erent years of studies (p = 0.2). Students from Students Research Groups (SRG) achieved higher score in comparison with students no attending SRG (19.3 ± 6.3 vs 13.3 ± 3.7; p <0.001) as well as students interested in cardiology comparison with other (19.6 ± 5.9 vs 13.0 ± 3.8; p <0.001). Students from SRG and interested in cardiology reached also higher results in practically every area of IC in comparison with other. Conclusions: Participants have insuffi cient, outdated and incomplete knowledge of new methods in IC. Th ere was no signifi cant diff erence in students of diff erent years of studies. Students belonging to cardiological SRG and interested in cardiology have greater knowledge in IC.
Go to article